Lama Gangchen Rinpoche is the founder of the NgalSo tradition. Lama Michel Rinpoche and Lama Caroline are lineage holders.

Lama Gangchen Tulku Rinpoche is the holder of a long and unbroken lineage of healing lamas and tantric masters. He has a profound knowledge of the interdependent relationship between the body and mind, and has developed the ability to understand the causes and conditions of both mental and physical illness, beyond the mere physical symptoms. Thus, he is able to aid many people overcome and heal their physical and mental problems by helping them to reconnect with their innermost pure-crystal self-healing energy.

Born in Drakshu, a small village in western Tibet in 1941, he was recognised at an early age to be a reincarnate lama healer and was enthroned at Gangchen Choepeling Monastery at the age of five. At the age of twelve he received the ‘Kachen’ degree, which is usually conferred after twenty years of study. Between the age of thirteen and eighteen, he studied medicine, astrology, meditation and philosophy in two of the major monastic universities of Tibet: Sera and Tashi Lhunpo. He also studied at Gangchen Gompa, Tropu Gompa and Neytsong Monastery.
In 1963, he went into exile to India where he continued his studies for the following seven years at Varanasi Sanskrit University in Benares.

In 1970, he received the Geshe Rigram diploma from Sera Monastic University situated in South India. After his graduation, he dedicated his time to the Tibetan communities in Nepal and India where he healed and saved the lives of many people. In Sikkim he was named the private physician to the Royal Family.

In 1982, he visited Europe for the first time and in the same year he established his first European centre: Karuna Choetsok in Lesbos, Greece, where he planted a Bodhi tree in the ‘Buddha Garden’ and consecrated what was to become the first in a long line of World Peace Buddha statues, thankas and images.

Since then he has travelled extensively – to over 50 countries around the world – both healing and teaching peace, non-formal education and the inner sciences. During these years he has led many pilgrimages throughout the world to some of the most important holy places of the Buddhist tradition but also to the sacred sites of other religious and spiritual denominations.

In 1988 he opened his first residential dharma centre outside of Asia: ‘Shide Choe Tsok’ Peace Dharma Centre in Sao Paulo, Brazil and soon after, in 1989, Kunpen Lama Gangchen was established in Milan, Italy. He is now the founder of numerous Dharma centres around the world and in 1992 he instituted the Lama Gangchen World Peace Foundation LGWPF (a UN affiliated NGO). He is also the promoter of the proposal to create a permanent spiritual forum within the United Nations, composed of representatives from all religious movements dedicated to the creation of world peace.

Lama Gangchen lives in Albagnano, Italy and is an Italian citizen. 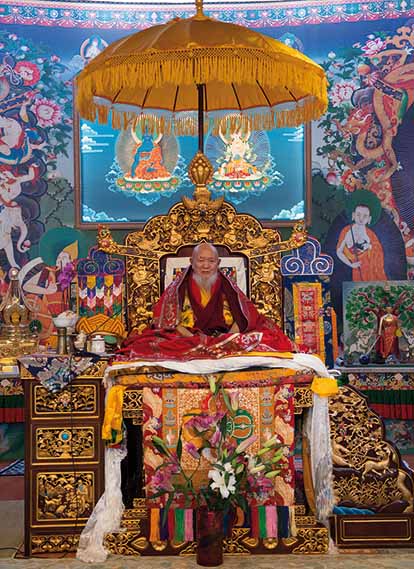 Lama Michel Rinpoche was born in 1981 in Sao Paulo, Brazil in a Christian-Jewish family. At the age of five his connection with Tibetan Buddhism became evident when he met Lama Gangchen Rinpoche during his first visit to Brazil, organized by his parents and their friends Monica Benvenuti and Claudio Bianchi.
In the following years, Lama Gangchen Rinpoche and other masters recognized Lama Michel as a tulku, a reincarnation of a Tibetan Buddhist lama. Great lamas like Zopa Rinpoche, Dagyab Rinpoche and Ghelek Rinpoche have confirmed that Lama Michel is the reincarnation of Drubchok Gyawal Sandrup, a Lama of Gangchen Chöpel Ling, a monastery in Tibet. During the fifteenth century at the time of the first Dalai Lama and the beginning of Lama Tsong Khapa’s Gelugpa school, Panchen Zangpo Tashi, one of Lama Gangchen’s incarnations, founded Gangchen Chöpel Ling monastery. His successor, the second regent of the throne, was Drubchok Gyawal Sandrup, a great yogi and master who gave many philosophical teachings.

At the age of twelve, Lama Michel decided spontaneously to abandon a ‘normal’ life to undertake a monastic life in southern India. He went to live at Sera Me Monastery – a monastic university with four thousand monks – and for twelve years he received the traditional training that is provided to lamas.

Since 2004 he lives in Italy with his master Lama Gangchen Rinpoche. From 2006 up to 2015 Lama Michel spent two months a year studying at Tashi Lhunpo Monastery in Shigatse, Tibet, under the guidance of the abbot, Kachen Losang Puntsok Rinpoche, one of the main living masters of Tibet. He studied philosophy, tantra, medicine and astrology, and completed his training in Buddhist Philosophy, meditation practices, Lam Rim, Lo Djong and Vajrayana.

From an early age, Lama Michel has travelled the world with Lama Gangchen Rinpoche giving speeches and teachings to his friends and disciples in a very loving and kind way. Nowadays Lama Michel dedicates his life to sharing his knowledge and experience worldwide in all kinds of formal and informal contexts such as conferences, speeches, teachings, retreats, in schools and universities, through social media etc. With his clarity, compassion and wisdom he shares the profound and vast Buddhist philosophy in an excellent way, perfectly adapted to the needs of people in our contemporary society. 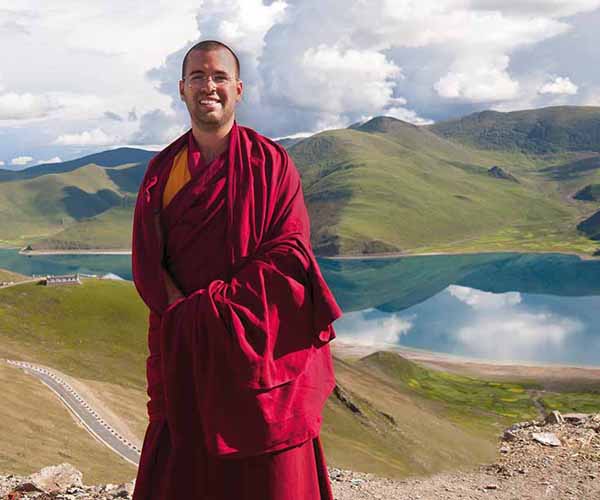 Lama Caroline, Dorje Khanyen Lhamo, was born in England in 1965. As a child she was fascinated by science and space exploration. Whilst studying Physics at the University of London, she began to feel that the scientific approach to reality was too external and conceptual and she became interested in Buddhist meditation and philosophy to experientially explore inner space.

From 1986 to 1991 she studied Kadampa Buddhism in Cumbria, England, with Geshe Kelsang Gyatso and his close disciples. In 1988 she was recognised by the World Peace Protector as the physical basis of Dorje Khanyen Lhamo (The Goddess Who Upholds and Transmits the Vajra Speech of the Buddha). Then in 1991 she met her principal spiritual master, Lama Gangchen Rinpoche, and, impressed by his modern and open approach to spirituality, began to study and collaborate with him.

Since then she has accompanied him on numerous teaching tours and pilgrimages worldwide, promoting the NgalSo Tantric Self-Healing methods, non-formal education and inter-religious dialogue.

In 2000, in Tibet, she was recognised by Lama Gangchen Rinpoche as a lama and as a lineage holder of the NgalSo teachings.

She has a diploma in Inter-religious Studies from the Open University (UK), an MA (with merit) in Buddhist studies from the University of Sunderland (UK). Her thesis focused on the study of the Borobudur stupa -mandala of Central Java. She has studied Tibetan and Sanskrit translation intensively at ITAS (The Institute of Tibetan and Asian Studies, Spain).

Lama Caroline has helped Lama Gangchen Rinpoche with writing all his books. Amongst other projects, she is presently editing the Lama Gangchen Sungrab Ngelso Gyatso – the collected works of Lama Gangchen that form the basis of the NgalSo tradition.

Over the years she has participated in numerous meditation retreats. She teaches worldwide on Buddhist philosophy, tantra, medicine, yoga and astrology. 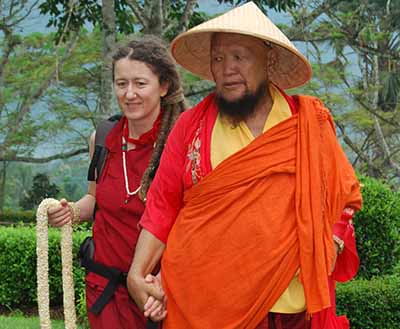 Limitless compassion: may all beings be free from suffering and its causes.

The lay-out, texts and images on this website may exclusively be reproduced for purposes of NgalSo Ganden Nyengyu lineage-affiliated non-profit organizations such as NgalSo Self-Healing groups and NgalSo Dharma centers or for (non-commercial) personal Dharma practice and study.